For an awesome guided adventure in the High Drakensberg, please contact my friend Gustav Greffrath here! He is an awesome guide and will make sure that your experience is exactly what you want it to be. Camping in anywhere you want it to be.

Sunset on the Drakensberg. This was taken from my campsite for a night.

On the rim of the High Drakensberg, hiking south towards an awesome vista. Not far from the chain ladders (which take you up here) you can see the entire Drakensberg wall. The rim of the High Drakensberg from the perspective of the rim! To the right, South Africa. To the left Lesotho.

Camping on the edge of the High Drakensberg. The cliff edge was about forty feet away from the tent, dropping over 4,000 feet to the valley below. In the background, the sun sets behind the ‘Eastern Buttress’. My favorite campsite of all time. A lone hiker stands on the edge of the Drakensberg during the sunset. The high places are what keep up going in the low. 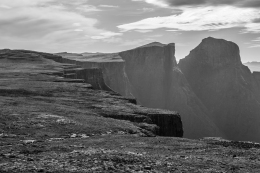 Sunset on the High Drakensberg

The golden light of sunrise baths the Eastern Buttress.

Climbing a chain ladder from South Africa into Lesotho.

The view from my tent perched on the rim of the Drakensberg. A lovely sunrise to be sure. Walking along the rim is like hiking against the grain. The deep cuts in the wall can dig a quarter mile into the plateau.

Sitting on top of the High Drakensberg looking out. I love having a Go Pro for these wide angle shots.

Sunrise on the Drakensberg Rim. The hiker is an Afrikaans friend named Gustav Greffrath, a guide who will take you up into the Berg with his company Itchy Feet.

Tendai, a zimbawean porter sits nonchalantly on a 4,000 foot cliff.

Climbing up the Chain Ladders is the best and fastest way to get onto the Drakensberg Amphitheater.

It’s hard not to stop and look out every few steps. It is a unique set up, with the lower berg fading into the grassy savannas of South Africa. The small hiker in the picture is a Kazakh woman I met while hiking. I now need to go to Kazakhstan! 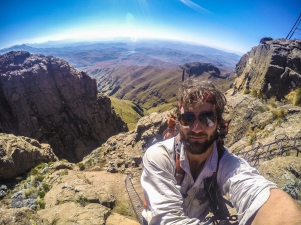 There are two ways to get onto the High Drakensberg from Royal Natal Park. One is a non descript ravine, and one is the ladders. Take the chain ladders! Sunrise at the best campsite ever.

Sunset on the High Drakensberg Look up Itchy Feet in South Africa to take you on a high Drakensberg Adventure. 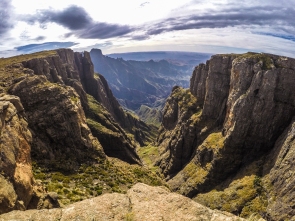 Looking down a precipitous ravine in the High Drakensberg. The rim of the Amphitheater is riddled with this deep cuts. From down below the wall looks almost solid, but when walking on top, the rim undulates like a snake. 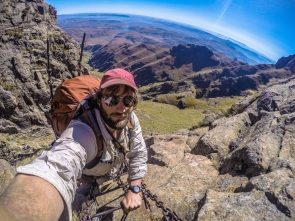 Chain Ladder Selfie. The best and quickest way onto the High Drakensberg. Where else can you climb a chain ladder where you start in one country and end in the other? Climbing up the Chain Ladders is the best and fastest way to get onto the Drakensberg Amphitheater.
-28.703671 28.920267
Giants Castle Game Reserve, South Africa

2 thoughts on “World Class Adventure: On Top of the Drakensberg Amphitheater”