The doors looked like the were ripped apart by a monstrous beast. Grey and splintered, they lay thrown apart, a gaping wound. Files and blueprints, mixed with rotting army jackets, gas masks, and mismatched boots, lay spilled out of the hole, like the wound was in mid clot. What had happened here, on this mountain top in Montenegro? – At the Vrmac Abandoned Fortress

Kotor, compared to it’s Adriatic neighbor in the north, is still relatively unknown. Only two hours south of Dubrovnik, Kotor could not be more in feel from Croatia’s famous coastal town. There might be a cruise ship in the Bay almost every other day, but the crowds are relatively small, and limited to midday when the ship is in port. The walled Old Town, and surrounding complex of ruins clinging to the steep mountain backdrop are more than impressive, they are of the utmost calibre. It’s no wonder the area is a UNESCO World Heritage Site.

Kotor’s quality can’t be understated, offering pristine, Adriatic coastline, infinite mountains, and some breathing room to enjoy it all. Kotor offers variety, and with variety, the seed of adventure has more chances to find purchase.

Take an ancient pedestrian and horse path up to a mountain plateau to explore an abandoned Austro-Hungarian fortress, and it’s outer structures. Within a fifteen minute walk from Kotor’s Old Town, walk around the shore of the bay to the VRMAC trailhead. The trail is steadily steep, switchbacking more times than you will count, to the top of the mountain. You can explore the innards of the fortress, but it is dark inside so bring some form of light. At some points there are gapes in the floor that can be spanned by walking across a wooden beam. There are also bats in the area, and any contact with them should be avoided at all costs. There are a few out buildings in the area as well that are pretty awesome to explore. Gas masks, army jackets, and official files lay scattered all over place. It’s a fun hike, with awesome views, and a unique reward at the end! 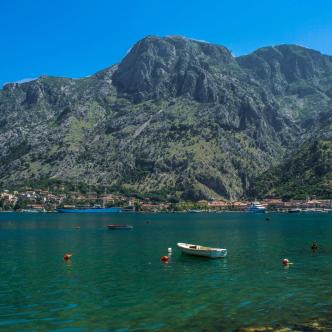 1. The walk from Kotor’s Old Town to the Vrmac Trail Head is about 12 minutes long, and hugs the shore of the bay.

2. A sign will point you left, labeled VRMAC. Follow that direction until bearing left again. This stairwell marks the beginning of the trail upwards. Just follow the red and white markers.

3. The path goes through a residential area for a time before veering off into the forest and hooking up with the ancient pedestrian path.

4. This ancient pedestrian path was originally used for Montenegrins’ who needed to reach the open Adriatic from their protected, bay town. 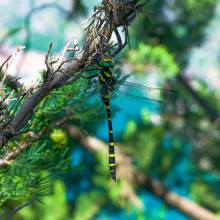 5. Dragonfly on the trail!

6. Once you hit the ancient path, the trail is rather exposed. Combined with the summer heat (can reach triple digits), and the lack of water, the trail can be pretty draining. So bring extra water and some sun protection.

7. In the higher switchbacks of the path, the trail enters tall forest, and gains some shade.

8. Looking down at the Bay of Kotor from the path. 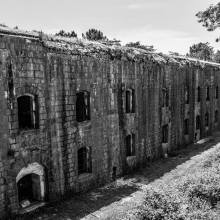 10. Inside the fortress there is no light but the scattered bits that come in through the windows and cracks. Beware of bats (RABIES IS NO JOKE), and holes in the floor. Most of the holes have a plank of wood you can walk across if you’re brave! 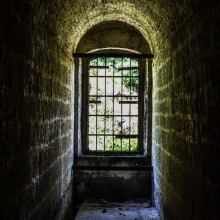 11. Looking out through one of the fortress’ barred window. (CRED: Nicole Frias)

13. Looking at blueprints from 80 years ago in the file room. (CRED: Nicole Frias)

14. Inside the file room of the Vrmac Fortress.

•Cycle the Bay of Kotor•

25 miles (41km) round trip of gently graded, and paved roads circumnavigating the Bay of Kotor. You don’t have to love cycling to enjoy yourself on this trip. For 10 euros, rent a bike in the Old Town (right next to the Old Town Hostel near the Southern Gate) and head off south first, keeping the bay on your right. Take the 2 euro Kamenari – Lepetane ferry over the neck of the Bay and continue onwards towards Strp and Risan. The Bay views never stop, and there are plenty of places to stop and jump into the clear water. Cheap little cafes dot the road, where decent food can be found. One of the main highlights is the small town of Perast. Not only is the two beautiful in and among itself, there are a few islets located off the coast. Locals will take you on a quick boat trip to the islets if you so desire.

Plenty of places to jump in and swim 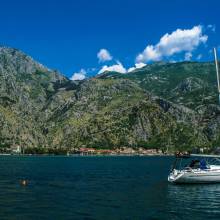 Looking at Kotor across the water. 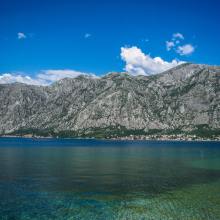 Mountain backdrops are constant in a country named after mountains!

After the ferry ride across the neck of the bay. 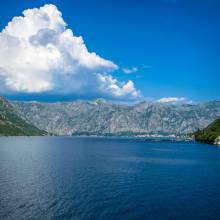 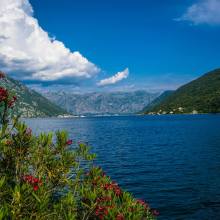 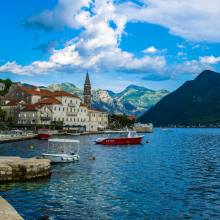 The beautiful town of Perast

One of the coolest basketball courts I’ve ever seen! 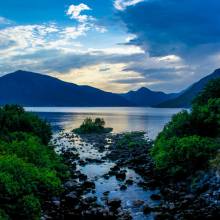 Heading back to Kotor.

Just before returning to Kotor, this local was fishing in the bay for the nights dinner.

Rising from the walls of the Old Town, straight up the side of the mountain, a massive network of ruins and fortifications lace the rock. The experience is very intuitive. If you are making your way up, you are going in the right direction. There are markers and some rudimentary signs pointing the way for the different routes you can take. Which ever way you go, you must explore St. John’s fortress, and if possible, at sunset. The views of Kotor and the Bay are spectacular, and there is just something kinetic and alive about sitting on a ruined castle and watching the sun set. There is a side trail you  can take that meets with a small families home. With some language barriers, this multigenerational family sells delicious homemade cheese, bread and spirits. You can go as high as you want, eventually reaching Mount Lovcen Park. 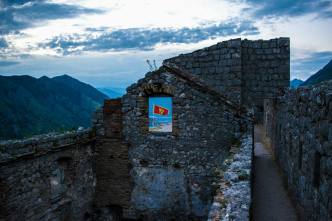 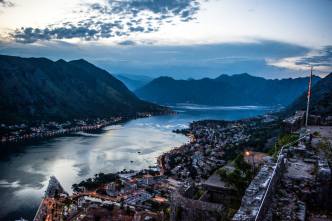 Spend time exploring the narrow streets and alleys of the Old Town, a UNESCO World Heritage Site. Stay at the Old Town Hostel for around $10 a night, in clean, renovated, air conditioned rooms, wifi, and a kitchen. There is a grocery store just outside the southern gate where you can buy cheap food and cook it in one of the two kitchens. Otherwise, the restaurants in the Old Town are going to be rather expensive. 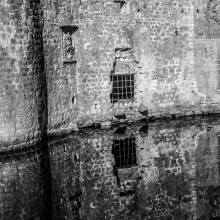 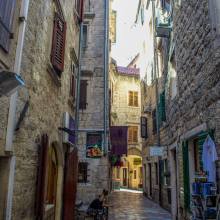 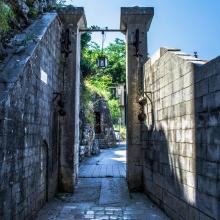 Devin (trail name Darwin) is 26 years old, the founder of Travel and Trail, and is devoted to adventure and pushing his limits, both mentally and physically. Devin attended New York University, studying Media, Marketing, and Communications, and played as the starting center on the Men's Basketball team. After graduating in 2013, Devin used his new found freedom to hike, climb, paddle, and travel around the world. So far he has traveled to 35 countries on five continents, spent three consecutive months in the Patagonian wild, Thru Hiked the Pacific Crest Trail from Mexico to Canada, and Thru Hiked the Appalachian Trail from Georgia to Maine. View all posts by Darwin Karch