Let’s start with a brief introduction of some selected hikers and a photo reference, if I’ve managed to capture their essence, in order of appearance:

1. Oz: Her real name is Dorothy so coming up with the trail name “Oz” was easy. She originally started the trail with one of her best friends, Truck but unfortunately she quit for personal reasons. But Oz carried on with admirable stoicism. Now she rolls with us. She shaved her head before the trail and has big, green eyes resembling a fairy or a pixy of some kind. She’s 19 years old and petite but manages to hike efficiently even with a 40+ pound pack. From behind you can only see her legs because her pack is so large on her small frame. We first met Oz all the way back in Georgia at Low Gap Shelter (the first of many Low Gaps). We hiked together on and off but more recently she’s hiked consistently with the Ruff Necks to the point where we just expect her to stay in the group. She’s one of those efficient hikers who gets up early and is out hiking before I get out of my bag. With only positive things to say about everything, her humor and good attitude are thoroughly appreciated.

2. Winter: We also first met Winter at Low Gap Shelter in Georgia. She’s a woman of few words and hikes her own hike in every sense of the term. Sometimes we will come upon her mid day taking a nap in a patch of grass, even in the pouring rain. She loves jumping in rivers and waterfalls, being one of the most free spirits I’ve ever met in my life. Before she got a trail name, she refused to share her real name either so for the first week or so we didn’t know what to call her. When she finally told us her trail name is Winter she said it’s because her real name is Somer (sounds like summer) therefore, it made sense. Winter gets up earlier than most hikers and heads out of camp by around 7am or earlier but will not come to the following campsite sometimes until 9pm or later. This is because she takes all the time she wants hiking, doing her own thing and rolling into camp with a big smile on her face. 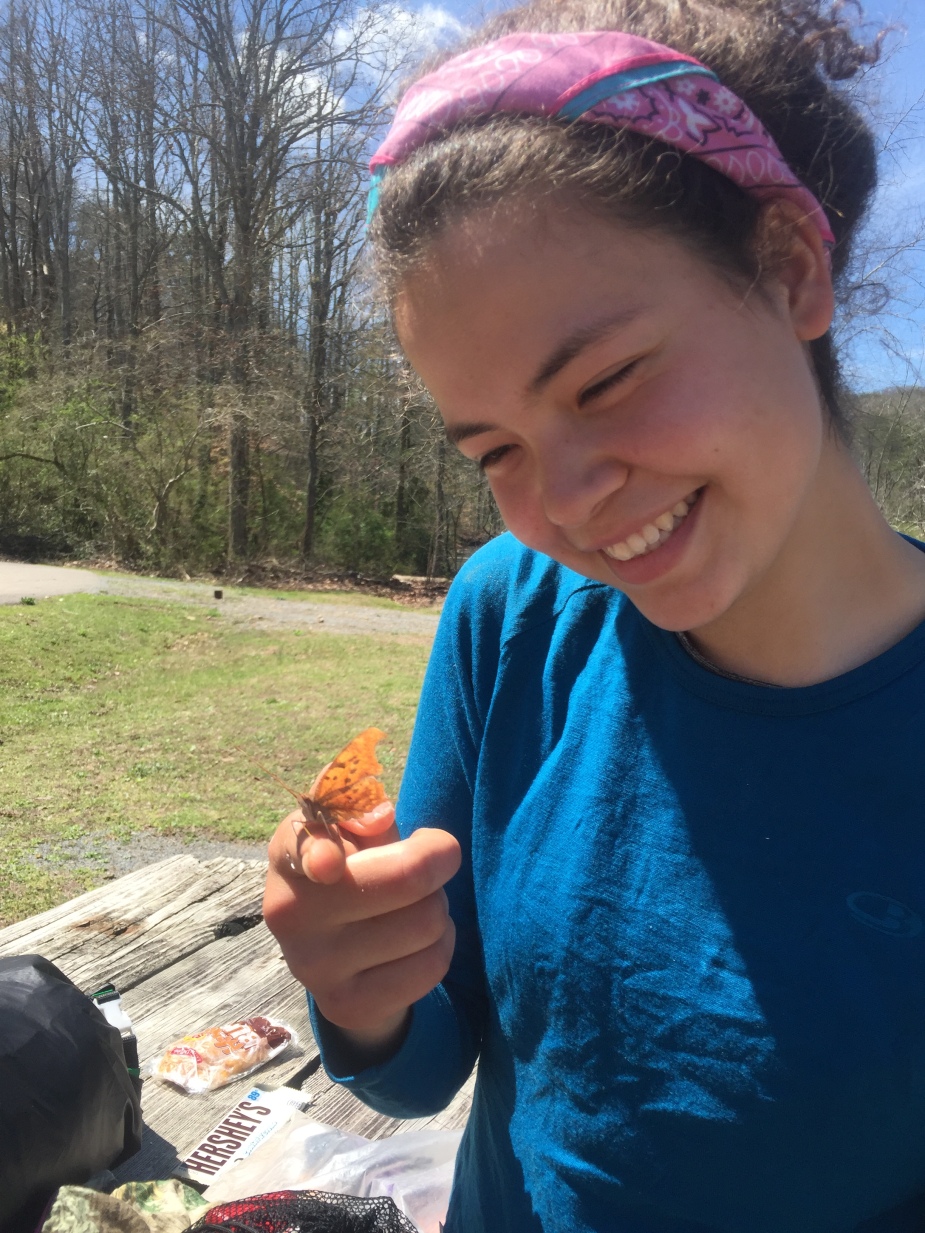 3. Lumber Jill: What a gem, this one. We first met Lumber Jill in Georgia but didn’t start hiking together until Franklin, NC. She got her name from her recent lumbering experiences with videos of her cutting down trees to prove it. Lumber Jill is an environmentalist and a powerful hiker. Her pack is on the heavier side but she rarely complains unless a blister pops up on her feet. I’ve talked a lot with her and was happy to have another female hiking amongst this group of men until the other ladies started hiking with us more consistently. Every night she writes and doodles in her journal before bed and each morning she is one of the first to leave camp. Like me, she carries an Appalachian Trail Passport (a fake passport where you can get stamps along the trail at various locations) and we try our best to help each other get as many as we can.

4. Fish & Radio: I’m putting these two gentlemen together because they are a team – probably the most efficient and economically sound out of all the hikers we’ve met so far. Fish and Radio are high school best friends from Syracuse, NY whom we met at Cold Springs Shelter just before the NOC. It was the coldest day we’ve spent outside with frozen mists that ran through the night, covering everything in a blanket of white. We bonded immediately but their efficiency pushed them on past the NOC while Darwin and I took a zero. We caught up to them days later in Elk Park. Their idea is to spend $1 a mile to save as much money as possible. We decided to try and be more like them and when we got to Erwin, TN we actually managed to hike in and hike out in the same day, thus saving on lodging and excess luxury. Darwin and I were so proud of ourselves. They are a great team with a wonderful sense of humor, happy to be out in the woods challenging the mind and body. 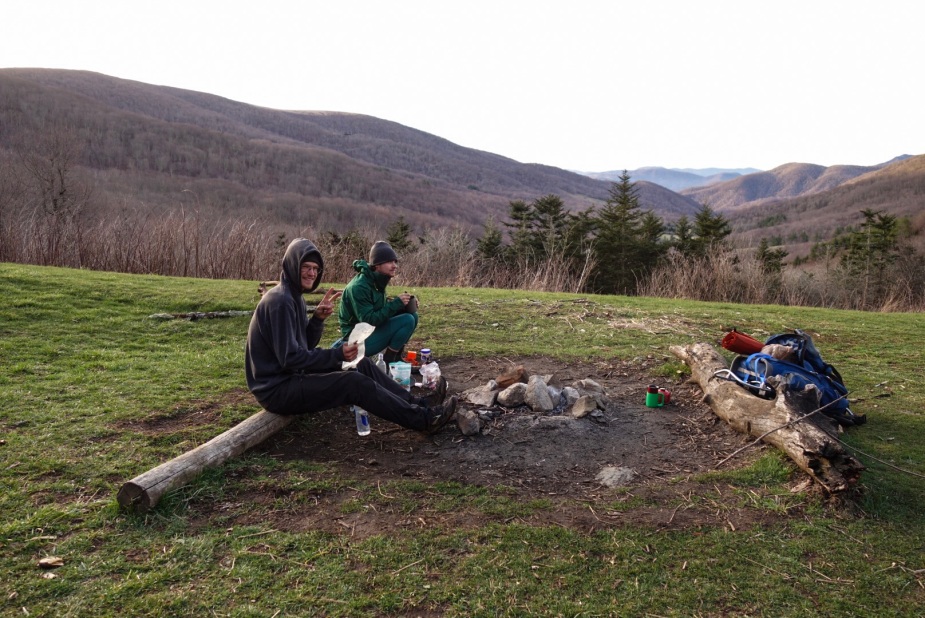 5. The Machine: Fuckin Joey. That’s his real name. He walked past Cold Springs Shelter after Darwin and I settled in to our bags and said “I think I’m going to keep hiking on”. Hence why he’s called the Machine. He hikes and rejoices in the outdoors. The weirdest part about the Machine, among other things, is that he eats without a stove so usually his meals consist of dry ramen and tortillas filled with numerous spreads. Apparently his level of laziness trumps any effort to cook a hot meal in the outback. However, when we get into town he goes hard and eats as much hot food as he can fit in his body to make up for the lack of such on trail. He keeps to himself but will randomly appear with a booming voice that always needs to be toned down. Sometimes I think all his solitude during the day comes out at camp when he finally sees human beings again – a ball of energy lights up and he can’t help himself but speak loudly. The Machine going to town on some Mickey D’s

6. Glim-Glom: Darwin and I first met Glim-Glom in the kitchen of the Nantahala Outdoor Center (NOC). We were sitting, eating some snacks with a few other hikers such as Royal Scarecrow and Good Life when all of a sudden a fair man of average height, long golden tresses, wig glasses from a Civil War reenactment website and colorful short-shorts (2 inch inseam to be exact) came in the room and asked us a few questions about the facility and the trail. We had literally never seen him before so it was shocking, to say the least, when we saw such a radiant creature. We talked casually and immediately found that his charm and sweet demeanor were impressionable in a warm way. He left the kitchen and we didn’t see him until the end of the following day after we left the NOC. He came in about 30-45 minutes after his hiking partner, Honey Badger made an entrance at Brown Fork Shelter. After about a week he put his culinary skills to the test and coined the hashtag “back country gastronomy”. He’s already blanched some almonds and flambé-d something else, even adding what wine pairings would go best with pepperoni bits and peanut butter. #backcountrygastronomy

7. Honey Badger: Honey, Badge, Badger, HB you name it. We first met him at Brown Fork Shelter, about 16 miles north of the NOC. It was a cold day and he showed up a little after us with mud caked on his legs wearing shorts and a t shirt. He said little but seemed genuinely interested in our gear, names, and what we were eating for dinner but kept relatively quiet as he naturally does. He’s a large, barrel chested man of few words and a dry sense of humor that takes no time to come to appreciate. To anyone looking on you would think he’s a big bully, but to us he’s a bearded man who appreciates cold beer, hot dogs, making fires and being a part of a wolf pack. He barks at us occasionally, thus coining the name Ruff Necks, referring to me, Darwin, Glim-Glom, Wet Wipes and Strider. This group is, for the most part, the first to arrive at camp and the last to leave the following morning. I think we just genuinely enjoy each other’s company, at least that’s what Honey Badger says.

Honey Badger warming up a dog

8. Strider: The first time I saw Strider was the same day we met Glim-Glom and Honey Badger. We walked passed him on the way out of the NOC but he stayed at a lovely bed and breakfast with a hot tub that night with a few other hikers instead of Brown Fork Shelter. Strider is the second tallest hiker I’ve seen after Darwin. His long legs and strides gave him his trail name and with good reason. Sometimes when I see him walking he skips along the path to various songs, focused and having a good time. He’s a vegetarian, which is admirable considering most of the towns we go to advertise their burgers and BBQ, but manages to get crafty on the go by making dishes such as tomato and chickpea curry with quinoa or a pesto mac and cheese. His favorite lunch is a tortilla with almond butter, honey and a handful of trail mix. When we got to Erwin, TN his main goal was to get a brightly colored bandana (he chose neon pink at the Dollar General, seen below). Strider is a classy man who recently shared that he spends too much on hair cuts back home because it includes wine and neck rubs.

Strider is in the bright pink bandana

9. Wet Wipes: Wet Wipes is a quiet character. His trail name comes from the fact that he carries ample amounts of wet wipes on a daily basis. We started hiking with him in the Smokies after Russel Field Shelter, our first campsite in the Smokies. He’s a carpenter from Massachusetts who likes to give Badger a run for his money in terms of friendly insults and jokes. When we went into Gatlinburg he offered to help out with laundry and came with Darwin and I to resupply, barely talking, joking occasionally. We didn’t see the true Wet Wipes until Hot Springs, NC when he randomly screamed “these FISH AND CHIPS are delicious!” Since then he’s come out of his shell and hikes with us everyday, sporting the Wet Wipes Wrap consisting of marshmallow fluff, peanut butter, Nutella, honey and chocolate chips (for texture) wrapped in a tortilla. 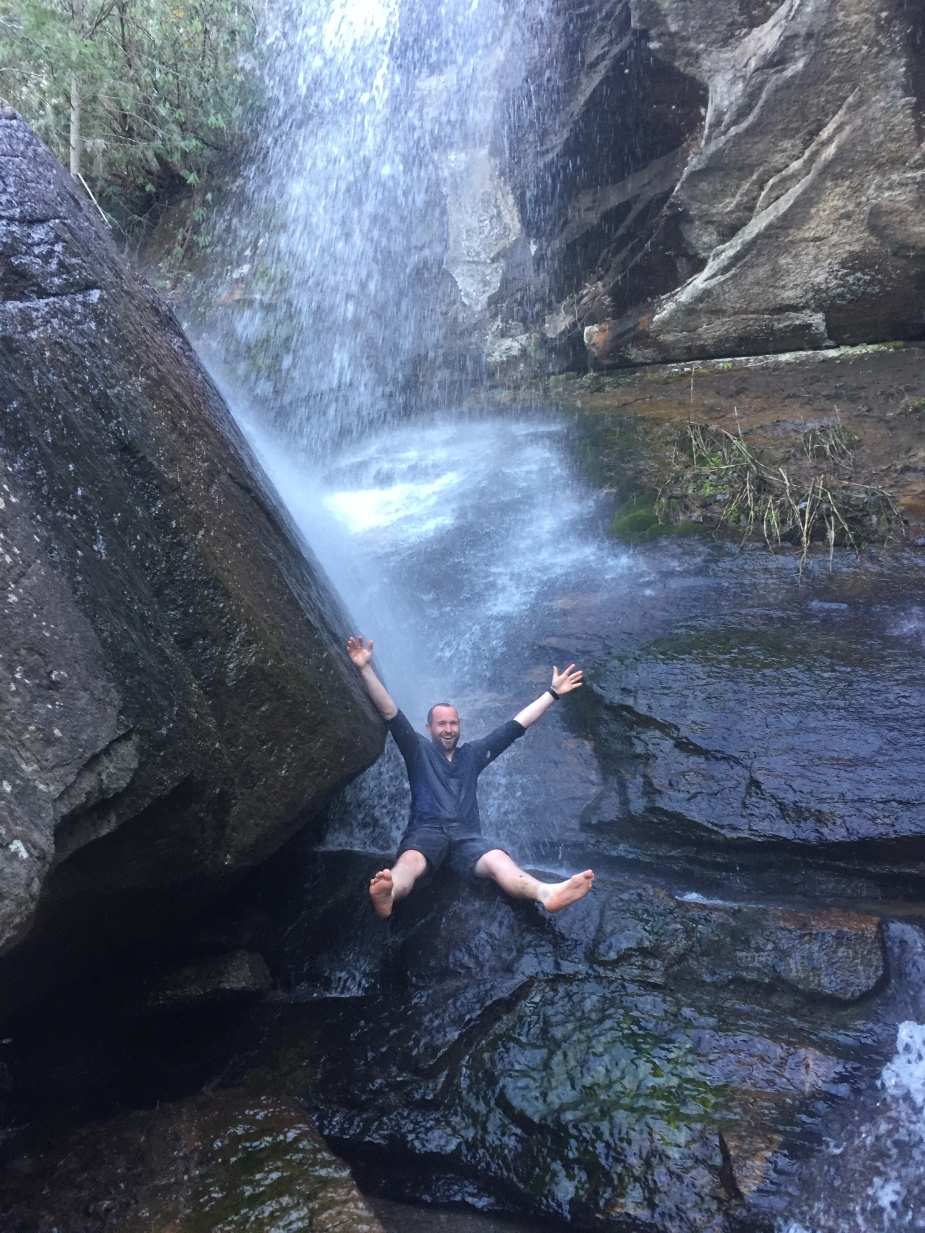 I guess you can say we have an eclectic bunch. We travel together at our own speeds with our own rhythms and at the end of each day we come together and share our unique perspectives about the trail. We smell gross together, eat together, and mostly sleep in the same shelters or campsites together, forming a rare bond that can only be found in the woods. In this short yet seemingly infinite month I’ve learned so much about myself and these wonderful people. Knowing that we all suffer the same pain and discomfort on this journey somehow makes it less miserable and more humorously enduring. I’ve learned to appreciate the comfort in the discomfort and let go of a materialistic mindset that I’m used to when indulging in societal luxuries. All I need is food, a water source, good company and warm enough clothing and I can maintain a positive disposition. Somehow as we continue onward the trail is simultaneously more challenging while also becoming routinely comforting.
Cheers to making it 470 miles into Damascus, Virginia! I’m proud of every one of these beautiful nerds and all the other hikers who’ve come this far and beyond. Here’s to another 1,720 miles left to explore!

Nicole is an avid traveler and hiker enthusiast. She graduated from New York University in 2016 with a Liberal Arts Degree and a Concentration in Media and Women's Rights. In 2014 she thru hiked the John Muir Trail and completed hiking the Appalachian Trail from Georgia to Maine in 2017. Follow along as they post through the summer on their incredible trip! View all posts by Nicole "Legs" Frias

There was an error retrieving images from Instagram. An attempt will be remade in a few minutes.