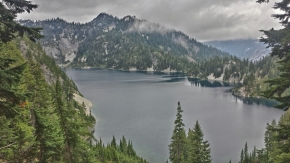 The trail skirts the lake as you make your way North. 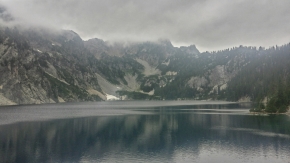 Grey Days can be found in Washington. It rained for a solid four days straight in this section. Everything was always a bit damp 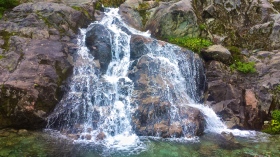 Cascades in the Cascades

The first day of somewhat clear skies in the distance. After hiking the past few days in rain, I couldn’t wait for some sun to dry out my gear!

There are so many waterfalls in the Cascades.

More Grey Skies, but it began clearing up 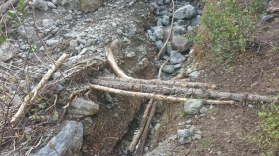 These huge washouts were common on the trail in this section from all the rain. This particular washout was about 10 feet deep. 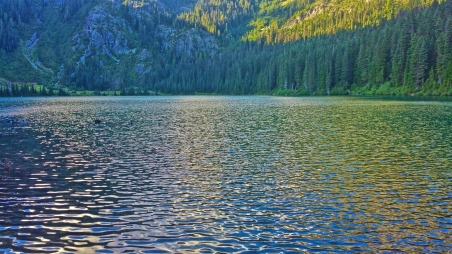 Deep Lake, about 30+ miles from the Steven’s Pass (Skykomish) Resupply. It was one of most favorite campsites on the entire PCT. The water was an amazing shade of torquoise, and there was a perfect site right on the lake edge. This was my view. 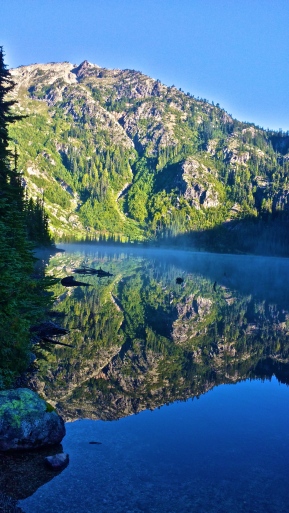 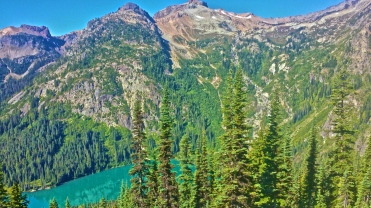 Looking down at Deep Lake

A spirit of the forrest joins me as I hike 32 miles in Skykomish.

Glacier Peak in the distance. Glacier Peak Marks the final big mountain sentinel on the PCT.

Pear Lake, Washington on the PCT

The last 200 or so miles of the Pacific Crest Trail are arguably the best of the lot. 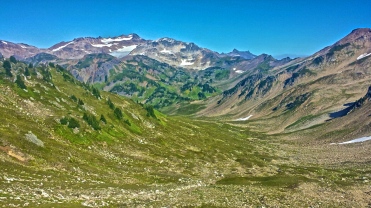 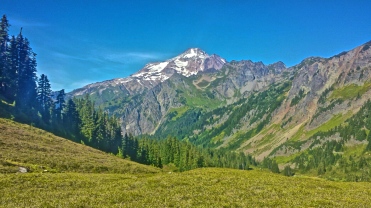 Approaching Glacier Peak and the Wilderness 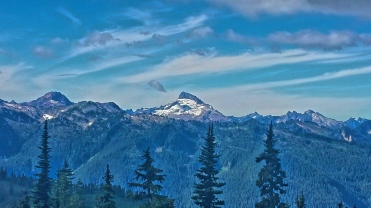 Reaching another crest and ridge between steep climbs in the Pacific Northwest.

This picture captures the severity of the North Cascades. The climbs were steeper here than anywhere else on the PCT

Continuing north on the PCT. Another nameless mountain pass climbed.

Mountain Pass Views never get old. Even after 2500 miles. 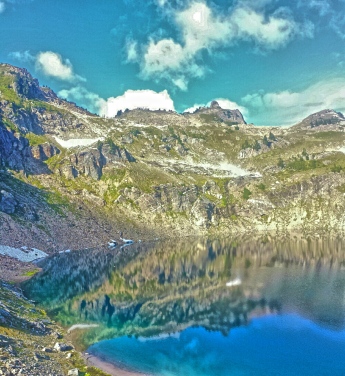 Mica Lake #3 (sorry it was so beautiful)

Darwin is happy in the North Cascades. This is approaching the last resupply point before Canada, called Stehekin.

Less than 5 days left on The Trail and it only gets more and more beautiful with each mile.

Water Source with a View. In the North Cascades of the PCT you can be choosey about where you get your water. This particular mountain creek was awesome because of the view.

The view from a water source, looking back at the Pacific Crest Trail in Washington

In the Glacier Peak Wilderness, the valleys are lush and dark, but the summits are blown open and filled with light. On a green shoulder of this mountain, an anonymous hiker has made camp.

The Pacific Crest Trail Continues onward in Washington. Only a few days more until the Trail is complete. 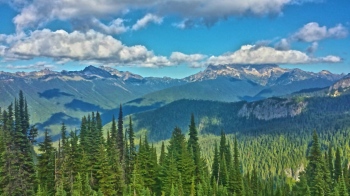 When you are hiking in such beauty, and have the advantage of 2500+ miles of hiking under your feet, it is hard to stop at one spot for the night. I found myself hiking more and more in this section, simply because I wanted to see what was around the bend. I ended up averaging around 33 miles a day. 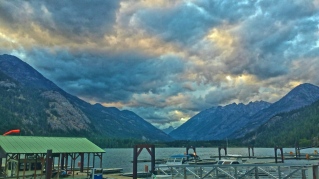 A View from Stehekin, Washington. This town is so cool, but a bit eery. Like something out of a Steven King novel, there are only two ways out of the town, walking over the treacherous mountains, or taking a ferry 55 miles to the town of Chelan via the lake. Throw in that there is only one working phone for the community and you have got yourself a horror story.

Just before Cutthroat Pass, I met a group of older hikers who were using a bunch of goats as pack animals. They eat the grass as they hike, and are apparently awesome animals to hike with!

On top of Cutthroat Pass looking ahead. I took a long break up here. I had a hard moment in which I struggled with comprehending the end of the trail in a matter of days.

Looking back at Cutthroat pass and the PCT in Washington 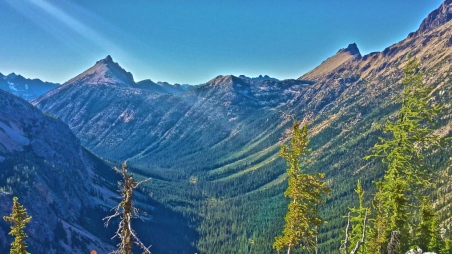 The Trail runs away towards Methow Pass. The coldest night on the trail was spent in that small bowl cut into the mountain in the distance. 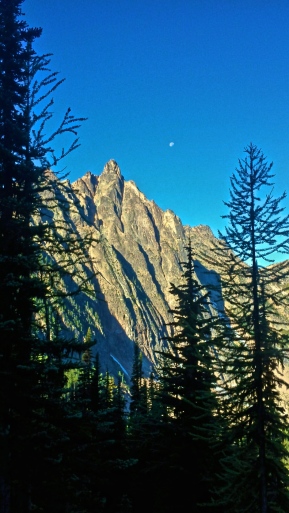 The moon was out and about on the second to last day of the trail. This was taken after Methow Pass.

I took this picture knowing full well that I was at the crest of the last climb of the Pacific Crest Trail. I was happy on so many levels, yet couldn’t imagine the reality of being off trail.

150 days later, on September 13th, I, Darwin have completed to Pacific Crest Trail. 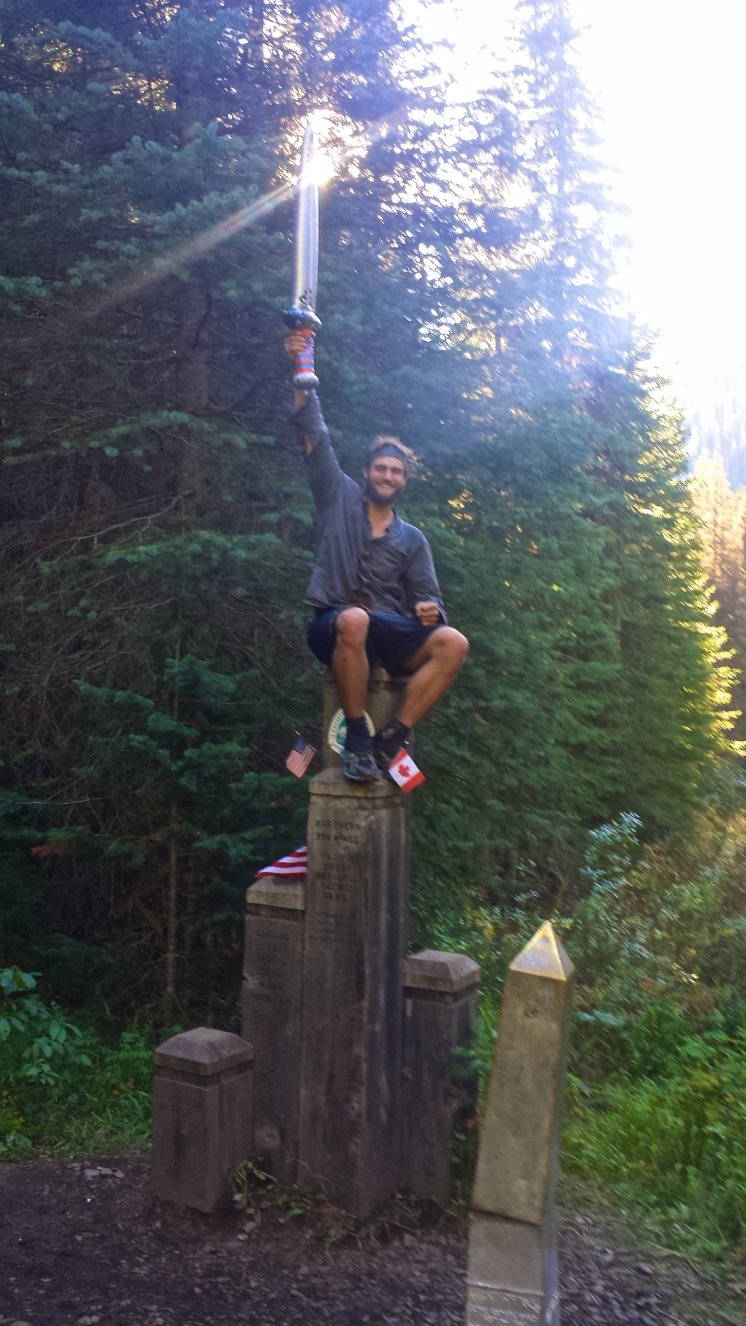 I HAVE THE POWER!!!! PACIFIC CREST TRAIL THRU HIKE COMPLETE!